Nice little bike vacation of Jela and Martin in Northern Portugal. A bike trip with approx. 700-800 kilometers, lot of difference in altitude (more than 8,000 m), many chilled cervejas in the afternoon due the almost unbearable hot temperature , a few unwelcome interruptions, many villages and some very nice towns and cities.

Kilometers: Our journey began in Lisbon, but we actually started cycling about 1.5 train-hours in the North of Lisbon (Entroncamiento) to avoid the city-traffic and the boring flat landscape surrounding Lisbon. From there we cycled almost northwards via small roads through cities like Abrantes, Covilha, turned east later (Viseu) to get to the coast (Aveiro) and from there followed the coast to Porto. With railway support we got back to Lisbon (took the train to Coimbra, cycled into Santarem from where we took the train again).

Difference in altitude: The meters in altitude were accumulating surprisingly fast as the small roads especially in Portugal’s interior (north of Abrantes) didn’t offer a centimeter of a flat section. However, the better part of ascent was on purpose. We cycled up the highest mountain of Portugal in the heart of the Serra da Estrella. Admittedly not super-high with its only 2,000 m (Torre) but at least the highest mountain of Portugal to be crested by bike.

Cervejas: Almost each day of the trip the sun was shining merciless onto our backs. Temperature regularly came to its climax in the afternoon at around 35°C so that we were usually not able or willing to move during the afternoon hours. Except for grabbing another beer  (which was quite nice, by the way, the most famous brands are Sagres and Super Bock).

Villages and Cities: We crossed numerous nice little places on our route , charming villages, with likewise very friendly inhabitants.  Small café places (very often with internet) provided us with cold beer, some shadow,  and fountains with fresh cold drinking water and most of the times one of the mini-markets was all we needed. When it comes to  towns and big cities we definitely were pretty impressed by Porto. Its exciting and offers a morbid and vivid charm at the same time. Especially the pitoresque slopes along the Douro river. The huge bridge constructed by Eifel and very much resembling the Eifel tower in style completes the scenery.

Interruptions: On the trip we also learned some lessons and had to go through a few tiresome incidents. The most annoying to start with was that we were not able to take our original flight. To cut a long story short: my bike didn’t comply with the policies of Zurich airport since the saddle stood out too much – about 10 cm – and I was just not able to lower it, as the special tool for me to do so was in the luggage we had already checked in. As a consequence the staff was not willing to take my bike! After lots of seesaw we finally booked a new flight for the next day. At a hill very close to the airport where we spent the night, we reconciled with the fate, in form of a BBQ with some nice Swiss guys from the near village Kloten. In Portugal then my gear cable tore which cost us a half day of detour and a few days later a pedal broke (what we very able to fix quite painlessly, although it was Sunday). 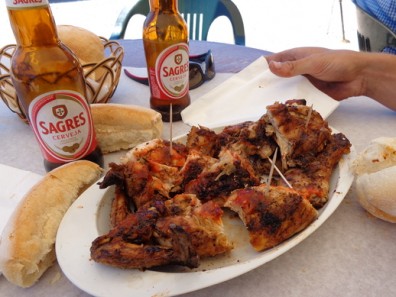 Very welcome and enjoyable lunch-BBQ at a dusty market place in a little town.

Not spectecular but cosy countryside in the heart of Portugal. If there wouldn’t have been this numerous ascents … 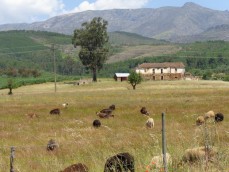 Church in Covilha with the characteristic tiles … 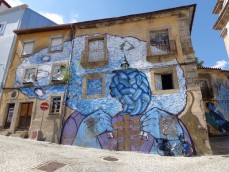 … and next to it a nice graffiti.

The road leading to the highest mountain of Portugal. 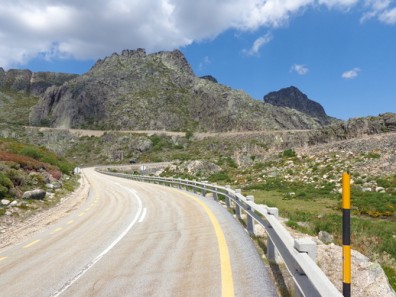 A water reservoir on the other side of the Torre. 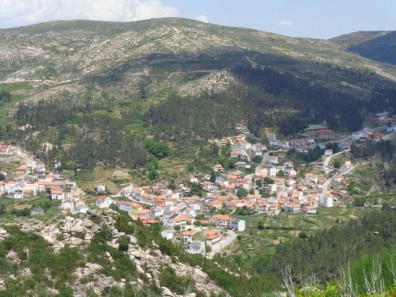 Appreciated cooling in the afternoon heat. There we also spent the night …

… and enjoyed our self made bread (left). 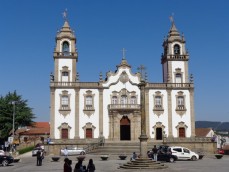 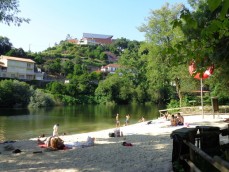 Another well appreciated cooling in the afternoon heat: a nice little beach at the river that led us to the coast.

Afterwards we enjoyed a nice dinner with sardines. 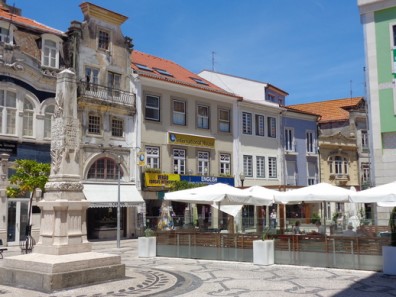 Aviero, at the coast in the south of Porto. 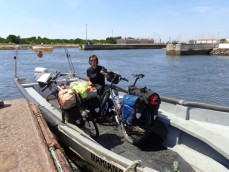 We had to take the boat to be able to continue directly along the coast. The ferry was broken that day. 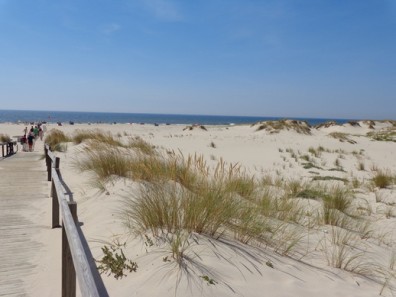 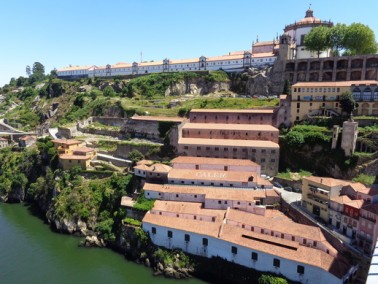 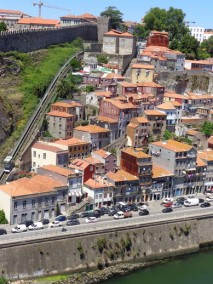 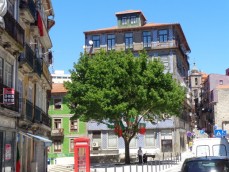 The street where our lovely hostel was located.

A church in Porto 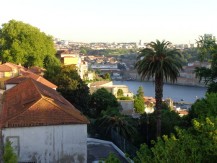 Porto in the evening. 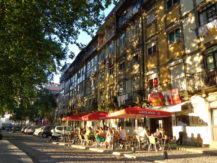 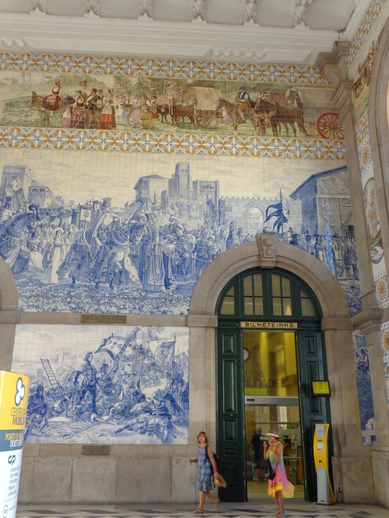